In Abkhazia, there are places with a large number of archaeological sites. One of them is the village Eschera. In this village there was detected a staging post of the lower paleolithic human, dolmens, cromlechs, monuments of antiquity. In 1977, archaeologist Shamba G. discovered here an ancient tomb and among the many finds he found a black-figure amphora with a lid and two handles. Amphora was restored at the Leningrad State Hermitage Museum, and transferred to the permanent exhibition in the Abkhazian State Museum. 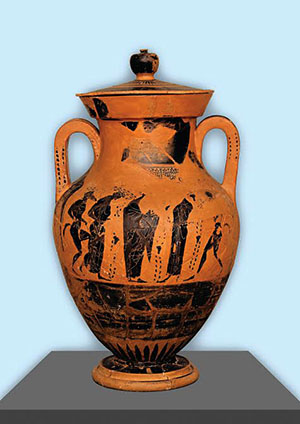 Surface of the amphora is richly painted, and most likely, the painting was made by one of the greatest masters of vase painting of ancient Greece. On one side of the amphora depicted beautifully composed figures of athletes-warriors in the chariot being prepared for upcoming competitions. The name of one of the participants in the celebrations – Nikon – was preserved. A wise teacher in a long robe, with a staff in his hand, is strictly observing the athletes.

On the other side of the amphora artist depicted the scene of procession of gods and their associates. The composition consists of six figures. In the center there is Dionysus – patron of viticulture and winemaking, one of the most popular gods of ancient Greece. On each side of him stay funny Sileni and maenads, who are constantly followers of Dionysus. The space between the figures filled with clusters of grapes.

Such vases were made in special workshops of famous artists of Athens – the capital of ancient Attica about 2500 years ago. These amphoras were expensive, and only very wealthy people had money to buy them. According to archaeologist Shamba G.K., such luxury as amphora could be afforded only by a representative of the local elite. Judging by the inscriptions, the owner of the painted amphora was famous among his countrymen not only for his strength and position in society, but he also was able to appreciate the beauty and understand the importance of writing.

On a museum exhibit

In 1953, in Sukhum Bay at a depth of 2 meters at the mouth of the river Basla was found a marble stele with a bas-relief pattern, which was attributed as the tombstone. In 1999 a host of “The Cinema Travelers’ Club” Yuri Senkevich visited Abkhazia in order to prepare his TV programme about religion of Abkhazians. In Sukhum, he visited the Abkhazian State Museum and told an interesting story that in 1953 it was he who found that marble tombstone at the bottom of the sea. Many years later, he remembered the names of that people, who were fortunate enough to lift the plate from the bottom of the sea. 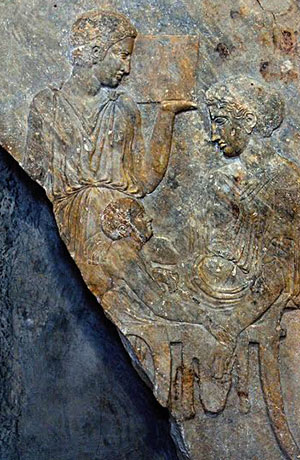 Lower left corner of the plate is broken. At different times a lot of expeditions came to Sukhum from St. Petersburg, Kazan, and together with the staff of the Abkhazian State Museum conducted underwater expeditions, but the missing part of a unique monument was not found.

On the obverse three figures are depicted. Elegantly dressed young woman sits in a chair, and with her right hand embraces a boy leaning against her knees. She looks at him with deep sadness, as if saying goodbye to him forever. Boy is holding her left hand and looks at a woman with pleading eyes. In front of them there is a girl, who also is looking sadly at the woman in a chair. In her left hand the girl has a box, possibly with jewels. On the chair of the young woman there is a piece of animal skin.

According to archaeologist Trapsh M.M., the plate depicts the scene of great sorrow.