Historical values ​​of the nation

On Abaza writing based on Arabic script

Relatively recently, I thought about this in connection with audio recordings of my father Magomet Hasarokov (in the native village Kubina he was known as Mata). According to the documents, the year of his birth is 1890. In his own story, his mother told him about the year of construction of a bridge from iron structures across the river Kuban in the northern part of the village (the bridge was completely demolished by flood in 2002). Back in school I found an inscription on the bridge: 1902 – 1903 years. Records were made ​​in 1976, when, after the first grade, I used my money earned working in a student construction team to buy a two-track tape recorder, “Dinah”, primarily for recording of my father’s voice, who at that time was often sick. The total recording time is 40 minutes: verses (Surah) from the Quran and religious chants (dhikr). Father died in 1977, and many relatives and fellow villagers made ​​copies of these records. 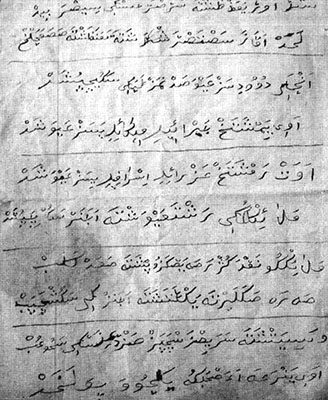 Throughout all the years my efforts have been focused on how to preserve records’ quality, but the original records did not survive. Compact cassette copies were more or less good, but short-lived. Once in our village came first computers, in 1998-1999, I with great difficulty managed to digitize recordings.

Pursuing scientific work in the field of linguistics, I remembered that my father could read only Arabic religious texts. Actually, I do remember that all his “kitab” (so-called old books with religious content, as opposed to secular, in respect of which was used a borrowed from the Russian language word “kniga” – “book”) were written in Arabic. And among the recordings, there was one Abaza text – religious chant related to the Prophet’s death. I knew that his cherished kitaby, with neatly rewritten by hand texts, were taken by my father’s faithful friends who are now also in the other world. But I still managed to find an old school exercise book with the text, handwritten in Arabic letters.

So there are some questions: who and when translated the text from Arabic into Abaza language and how, using only Arabic script, he managed to write it down? Besides, I hardly remember that in early childhood I have heard a few other Abaza texts read by venerable ministers of religion choir.

We can assume that these and similar texts were translated and recorded by Umar Mekerov or someone from his students. Professor V.Tugov in his essay on Umar Mekerov referred to the publication in the newspaper “Kuban news” from August 10, 1891. According to the newspaper, Umar Mekerov “arranged in his village an exemplary school with a pension and contributed a lot to the spread of public education among highlanders”. He also “made ​​a special alphabet based on the Arabic alphabet and adapted to local language and he taught children using this new alphabet”; he “made ​​even a textbook but it was not published …”

Also among the imams, who worked in Soviet times, there was a one very educated imam, who was engaged in translation of religious texts from Arabic into Abaza language. His name was Kapov Ahmad and he lived in the village Staro-Kuvinsk.
On the other hand, it is logical to assume that the translations and their records were made long before the October Revolution of 1917, which means that in Abaza settlements abroad, in the families of the descendants of Muhajirs, could remain similar texts written on the basis of the Arabic script.
I propose to try to find and organize these texts, which have great historical value.

Audio Record. Religious chants about the death of the Prophet