History through the legend of Abaza

Professor of the Leningrad branch of the Institute of Oriental Studies of the Academy of Sciences of the USSR Anatoly Nesterovich Genko was a polyglot scholar, who studied and scientifically described Chechen, Ingush, Abkhazian, Abaza and other languages ​​of the peoples of the Caucasus. He was an author of the first edition of the monograph prepared for Abaza language. The manuscript of the book “Abaza language. Grammatical essay on Tapanta dialect” was ready in May 1934, but for some reasons it was released only 21 years later, in 1955. The author was arrested in late 1930s and died in prison in 1942. Anatoly Nesterovich made ​​two research trips to Abazin villages of Cherkess Autonomous Region in 1929 and 1933. He visited auls, collected materials, recorded them using specially designed Latin characters, processed, organized, commented and translated them into Russian. Most of them were folklore materials such as tales, proverbs, satirical poems, historical legends and some real cases. After his arrest and subsequent death all scientific materials and studies of the scientist were kept in the State Archive of Leningrad (now – St. Petersburg), and only a few years ago were discovered by a folklore scholar, President of the Academy of Sciences of the Republic of Abkhazia Zurab Dzhotovich Dzhapua. 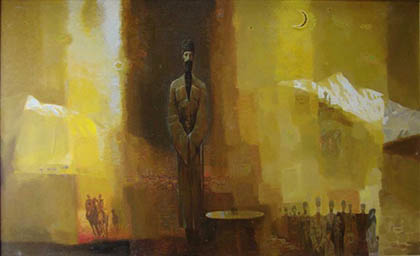 Archives of the Leningrad scholar being of great scientific interest require further study, processing and publication. But in order to perform it, the texts should first be translated from Latin to modern Abaza script. For this reason, Zurab Dzhotovich gave me copies of manuscripts written in 1929 by Anatoly Nesterovich. My study revealed many interesting and curious facts. I want to introduce a historical legend about the transmigration of Abaza from Abkhazia to the North Caucasus to the readers of the website “Abaza Country”. Unfortunately, Genko A.N. did not provide the name of the narrator and did not indicate a place (village) where this legend was recorded. But this fact doesn’t make these records less valuable.

The most knowledgeable of the old men of our village Tsekua Lokman told his version of Abaza history. Without exception, all speaking Abaza language came out of Egypt, and left it of fear of the British.

When they left Egypt and came to Abkhazia they settled in the valley of Marcoola. Then, choosing 75 riders sent them to find a comfortable place of residence. First they came in Pskhu and after spending 4 days, crossed the mountains and came to the headwaters of the Teberda and inspected the areas so-called Indysh, Hatash and Ashvyrkva. Then, coming out from these areas, down to the plain they met Nogai settlements. Greeting Nogais, they said: “If you accept us and sign a contract with us, we will live together.” Nogai accepted them and gave them the oath. Then they gave them the freedom to choose their residence place in any convenient area between Urup and Baksan. So they passed Baksan and after choosing among three rivers Arkhoti, Ardon and Urdy the most safe and useful river Urdy, went back to those, who sent them. There they described everything they met during their journey and a place they chose as a residence. Then those who decided to move to the chosen place, moved and others stayed there. Those who stayed now are called Abkhazians. Others went straight and settled in Urdy.

The place they chose was an area with inaccessible terrain, bad roads, and due to the fear of the arrival of other people they did not build any roads. Roads were blocked by slope; the wheels of carts could not be the same, so the wheels were as follows: one wheel was big and the other was small. On the road big wheel rolled at the bottom and the small wheel – on the top. When the cart reached the end of the road, the wagon was overturned and the position of the wheels was changed, in order to make the big wheel roll at the bottom and the small wheel – on the top, and so they came back with their baggage. Thus, they have lived there for 300 years. Then one day some old man took his cart, put a gun on it and went into the forest. After he arrived, he forgot to change the position of the wheels and loaded the cart. On his way back way back there was nothing to do about it. After that, he got angry with the cart and brought a cart to the cliff, under which the village was located, shouted and fired. All the villagers rushed out and then he cried out: “The Urdy Urdshi, Loov is a destroyer of the village.” His cart overturned and rolled upside down to the village. After that Musa Loov, finding it an insult, gathered his entire village and decided to move out of there. They saddled bulls and seated women and children on them, entered Nogai’s area and reached the watersmeet of Eshkakon and Kuma.

Musa Loov died on the way, and his son Saralip became a Prince. After they lived here for 4 years, Kabardians came. When Kabardians came in contact with them and began to cause damage, they got together and built a fortress around their villages. There, in the so-called Saralipov Khanate lived 7 generations.

Further, during Prince Murzabekov Loov’s rule one day they went and plowed a territory of Zolki and planted millet. When the time came, people were elected and sent to inspect the cultivated field. They came and saw that it was not ready and arable land remained black. They got upset and came back to the village and told them: “Your millet is not ready. Let everyone look for food.”

Murzabek was a holy man. He ordered to slaughter the sacrificial animal, took his friends and walked three times around the field, begging Allah and reciting prayers. Then the day became grey and it looked as though it might rain. He led his companions to the hill, ordered them to get off the horse and told them: “You slip your felt on.  Thunder crushes in the sky, lightning strikes, and rain falls – whatever happens, none of you should raise your head and look at sky.”

They lay face down and as they were told, they lay all day and night. Shed a heavy downpour. At dawn, “Get up!” – He told them. When they got up, they saw grown millet, swaying in the wind. They were surprised and delighted. They mounted their horses and came back and said to the villagers, “Your millet is not such as you were told. Send people and take a look. “

They gathered those who were sent for the first time, and sent them back. They came and saw that millet was ready for harvest. They immediately turned back and told, “Millet is ready and it will soon begin to crumble.” Hearing this, happy villagers went and mowed millet. Then Kabardians wrote about Loov’s son this song: “Son of Loov, Murzabek with a sparse beard went on Zolka, and he was lucky.”

People spoke about Murzabek as following: “He was so holy that after throwing a prayer mat upon the water, he stood on it and made ​​a prayer.”

After harvesting millet, they were able to spend the winter eating it. And next spring they moved out and settled just north of the point of modern Gumlokt. They lived there until 1831. Then they became so numerous that no spare place was left in the village. Then they again asked Nogai and gained their freedom to settle at the foot of the mountains from that place to Urup. Those, who wanted, stayed in their old place, some of them moved to Uchkul; the one part went and settled in a place called Gonachkhir, and others settled wherever they wanted.

Then, when a rumor spread that Russians from the village Dzhegutinskaya would move to Uchkul and told to move to this side of the Kuban, half of the settlement moved there. They’re still living here. They are called Kubinalokt.

One of Loovs said: “I’m not going to draw water from the river with my left hand”. He left and settled on Indzhig Chukun. They’re still living here and they are called Indzhiglokt. If you ask when it happened – it happened in 1861.

A painting by Muhamed Hagundoko was used