How many letters are in the Abaza alphabet?

In late 2014 the Department of Education and Culture of Abaza Municipal Region announced a theme-based contest among students of educational institutions for the best work on the history and culture of Abaza. Among topics there was a topic “On creation of Abaza writing.” Among the issues raised by the authors of essays on the subject was a pressing question: How many letters are in the Abaza alphabet? In answering this question, different sources give different numbers of 67, 68, 69, 74, etc.

Recall that in 1932 for the indigenous Abaza people has been developed a national alphabet based on the Latin alphabet. 6 years later, in 1938, the alphabet was translated into Russian graphical basis. We use this very alphabet nowadays.

The originator of the alphabet in Latin script is a popular educator Tatlustan Tabulov. Here is the alphabet, which was published in the Abaza language textbook by T.Tabulov “Grammar and Spelling”, published in 1933. 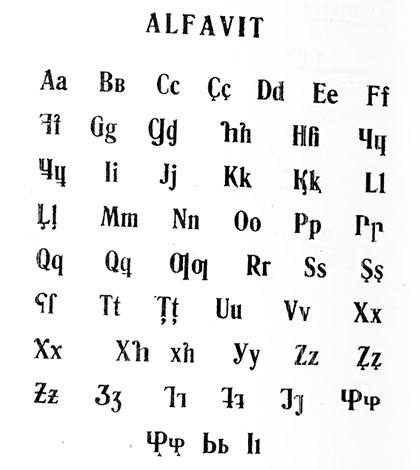 Simple arithmetic shows that this alphabet has 52 letters. However, it is likely that the work on the alphabet continued, because by 1938, when the question of its transfer to the Cyrillic script arose, it had already 69 letters. Professor Serdyuchenko G.P. worked on translation of Abaza language alphabet to the Cyrillic letters. A version of alphabet prepared by him was published in the newspaper “Red Cherkessia.” 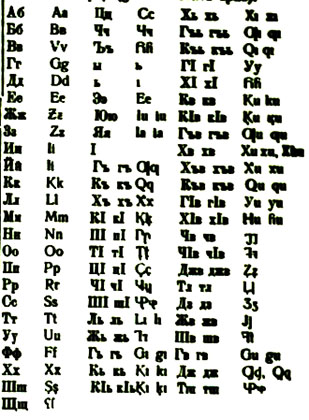 In Abaza alphabet based on Russian graphics there are no 69 but 70 letters: it has an additional “I” reminiscent of the Latin capital letter “I”. It is obvious that in the coming years, linguists and textbook authors have repeatedly returned to the Abaza alphabet issue, because the shape of alphabet and number of letters began to change. For example, in the introduction to “Abaza – Russian Dictionary” published by the publishing house “Soviet Encyclopedia” (Moscow, 1967), alphabet contains 71 letters, in “Spelling Dictionary of Abaza Language” (Tabulova N.T., Cherkessk 1992) alphabet contains 67 letters and alphabet published on the pages of pages “Russian – Abaza Phrasebook” (Dzhandarov A.M., Cherkessk, 1991) consists of 68 letters.

In recent years, this question has again become the subject of heated debate in connection with the re-release of textbooks. The members of the educational and methodological Council of the Ministry of Education and Science of KCR noticed that the alphabet of Abaza language in various textbooks also differ in the number of letters. Theoretical questions remained open. We intend to bring them to a discussion of the scientific community. In practice, we come to the conclusion that the alphabet should reflect all the letters found in Abaza texts regardless of whether they are independent letters or additional characters. This position is shared by the author of this publication. If we follow this statement, Abaza alphabet consists of 72 letters as following: 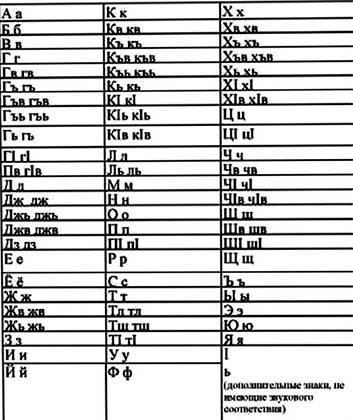