Outside of the historic homeland

According to some historical documents, in 1860-1861 migrants tried to return to their homeland after they could not “find the expected benefits and facilities under the auspices of the Ottoman Porte”. Only in 1861 from 8 to 10 thousand workers made an attempt to return home through Azerbaijan by land. But there neither home nor property remained; according to rules their lands had also been transferred to other owners. Caucasian Committee, believing that the “return from Turkey of homeless Caucasian immigrants, who spent all their possessions during their trips, could be dangerous for the region and would cause increase in robberies and looting”, offered to take all migrants returning by sea and, without delivering them to any of the Caucasian ports, send them to Don and settle them in the lands of the Don Cossacks or possibly in the province of the Russian Empire. Those who came across the land border were offered to be sent to Baku and from there by sea to Astrakhan (1).

However in the end, it was decided to refuse documents of the natives of the Caucasus, who became a citizen of Turkey but still wished to return to Russia to re-take Russian citizenship. Russian Diplomatic Imperial Mission in Constantinople sent out circulars related to this case to all consulates in the Ottoman Empire. Those who delayed their passports and could not prove any good reason for this delay were not given permission to pass through the Russian border. In case if someone from the Caucasian immigrants had an opportunity to return home without consular marks in the passport with the expired documents, it was recommended to send them for an eternal exile settlement in the internal regions of Russia. Those, who had a valid passport and did “nothing related to the incriminating in joining the Turkish citizenship” was required to give the testimony of a property and a plot of land in the Caucasus. 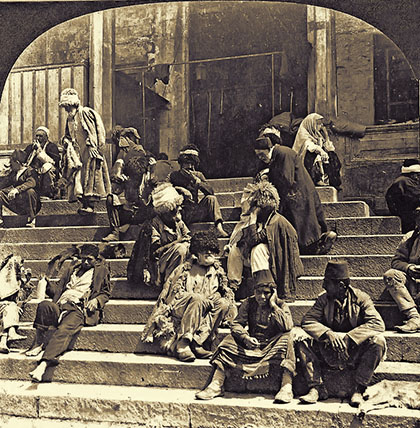 In the case of positive response, these people received permit to cross the Russian border, but with a warning that if they provide wrong information, they would not be settled on their old areas of living, and their case would be reported to the authorities. As a rule, subsequently these citizens were sent for permanent residence in the Orenburg province. In doubtful cases, an entry permit had been issued only after the positive response from local Caucasian authorities.

Mountain tribes could not understand what was happening. For example, karanogai tribe, wandering in the east of the Stavropol province, near Kizlyar, was going to move just because there was a rumor, that Russian tsar and Turkish sultan signed a contract according to which all Muslims would be “released” from Russia to Turkey. People also said that everyone had to rush to the Sultan – the supreme head of all the faithful. These rumors were supported by a small layer of absolutely fanatical believers and others were scared to object to them without any accurate information.

According to some Turkish sources, in 1864 up to 75 % of Abaza were forced to resettle in Ottoman territories, and after that only 10 thousand people were left on their native (modern Karachay-Cherkessia) lands (2). In our opinion, these estimates are very approximate, because there was not accurate statistics of migrants in Russian or in Ottoman Empires. With full confidence we can speak only about the number of Abaza population that remained in the North Caucasus. Since the beginning of the twentieth century were carried out the regular statistical records of the entire population of the Russian Federation. According to the 2010 census data, 36,919 Abaza live in North Caucasus. The most numerous Abaza diaspora is located in Turkey.

In the twentieth century, ethnic minorities of Turkish Republic were subjected to the forced assimilation. Official government policy was to create a unified Turkish nation. On the basis of the Language Act of 1932, children in schools were forbidden to speak in languages other than Turkish. On the basis of the Surname Act, Caucasians had to change their surnames; Turkish people were considered to be a nation “consisting of Islamic groups.” The names of villages were changed; campaigns were organized with the following slogans: “Citizen, speak Turkish!”, “How happy is the one who says I am a Turk.” Decisions of parents, who gave their children Caucasian names, were challenged in court, and judges changed the names of the children (3). After the World War II, Turkey has moved from one-party to a multiparty system and the country began to create cultural national associations. But the number of many people in Turkey was not determined, because due to the general atmosphere in the country, many people did not want to answer questions related to their mother tongue.

Massive urbanization, fragmentation, which arose after the migration within the country, radio and television broadcast, since the 1980s the outflow of young people to cities for education have led to the loss of the mother tongue and foundations of national culture among young generation,. Native language and culture remained largely among those people who lived in villages. Urban population preferred Turkish language and culture.

Currently, the countries of the former Ottoman Empire (Turkey, Syria, Jordan, Egypt and some other countries) have a large number of Abaza descendants. Only in Turkey, according to some sources, there are between 300 to 500 thousand Abaza and Abkhaz. But, as noted above, these numbers are not accurate. In Arab countries (former vilayets of Ottoman Empire) by the beginning of the XXI century mainly occurred assimilation – a number of Adyghe- Abkhaz peoples united into a single cultural conglomerate. For example, in Jordan, where all the Adyghe-Abkhaz people united to confront the threat of cultural assimilation, choosing a single language for their communication – Kabardian. They represented themselves as a single Circassian community. At the present time, the younger generation is rapidly losing the knowledge of Kabardian language, making every day conversation entirely in Arabic.

Since most of Abaza migrants stayed in Turkey (Turks call Abaza migrants both Abaza and Abkhaz), they had an opportunity to create compact settlements. Abazin and Abkhaz villages, as a rule, were not mixed. According to reports, the Abkhaz and Abaza mostly live in provinces such as Sakarya, Duzce, Eskishehir, Samsun, Yozgat, Chorum, Tokat, Adana, Sivas and Zonguldak. The biggest community and the longest resettlement of Abaza is located in Kayseri, according to some estimates the number of people with the Abkhaz – Abaza roots here is about 10 thousand people. Abkhazians known in Turkey under the name Abaza- Apsua most densely live in the small districts of the west of Turkey (Izmit, Adapazari, Duzce, Bolu, Bursa-Inegol, Kutahya, Bilecik and Eskishehir); Abazins known in Russia as “Abaza” live in the eastern region (Bilecik, Eskishehir, Samsun, Amasya, Tokat, Yozgat, Sivas, Kayseri, Adana) (4).

Abaza living in Russia, have different thoughts related to the fact of migration of their ancestors in the Ottoman Empire. During the public questionnaires conducted by us in Abaza settlements of Karachay-Cherkessia they gave detailed answers on many topics and issues relating to Islamic migration. For example, a respondent from the village Apsua (born in 1964, male) said: “Throughout history, our people have suffered from political influence of foreign forces. We are very weak because of the Turks, if it were not for Turks, our Abaza people would not fight against Russia and would not have gone abroad. We must not forget that in 1862 our entire village, in the vast majority, went to Turkey.” At the same time the same respondent noted that “Abaza, who left to Turkey, preserved more of their traditions” (5). Respondents noted that the Islamic factor played a positive role in the consolidation of Turkish foreign community. However, in recent decades, under the impact of globalization, there are serious changes; the younger generation of Turkish Abaza begins to lose their ancestral traditions, especially they are losing their native language.

Modern trends in the development of Abazin community allow us to make the assumption that the position and role of Islam will be strengthened. In the current official policy of Turkey, Islam is becoming increasingly important reference point of social development. We can very safely assume that communication between Russian and Turkish Abaza communities will continue to develop and in the future it will lead to further strengthening of the position of Islam and the influence of the Islamic factor in the many spheres of life of Russian Abaza.