The current state of the Muslim community

During the Soviet period Abaza of North Caucasus in their religious life experienced the same difficulties as the entire population of the country, but Islam still continued to be one of the signs of national identity. In the post-Soviet period appeal to Islam has become more widespread and in some cases Islam serves as a factor of the consolidation of the people and supports the social equilibrium in Abaza community. In opinion polls related to the study of traditional Abaza culture held by us in the territory of Karachay-Cherkessia, special attention was paid to the approach of Abaza to religion. In a survey for rural respondents, more than a third of respondents gave detailed answers to the question about their attitude toward Islam.

The mosque in the village Apsua

In 2011, during the survey of 100 respondents in rural areas, more than 30 people gave detailed answers to the question about their attitude toward Islam. Only 1 % of respondents denied the values ​​of Islam, more specifically, 3 people were convinced that Abaza were not Muslims but they had been and continued to be pagans. During the interviews I have often observed that the power of emotional belief in defending their views among Abaza was so great that sometimes the opinion of several ideologically minded people could be perceived by the public as an indisputable truth. So, three respondents were set quite categorical: “Abaza have never been Muslims, we have always been pagans”; “Abaza inherently are neither Christians nor Muslims; we were forced both to Christianity and Islam”; “Behind Pskhu, in the mountains of Abkhazia, where we came from several centuries ago, there are true places of worship”; “We used to worship the water, branches, rocks, and only then came Islam”; “Before, we had not Islam.”

But the opinion of the rest of the respondents was not so categorical. More than 90% of respondents supposed Islam to be an objective reality in which they live for several centuries. For example, in the village Krasny Vostok in pre-Soviet period there were three mosques. In the center there was a mosque with Friday services which had a madrasah, where studied children of wealthy parents, but at the request of the public and the imam children from poor families on preferential basis could also have education there. Similarly to Krasny Vostok, formerly there was a mosque in the village Apsua. 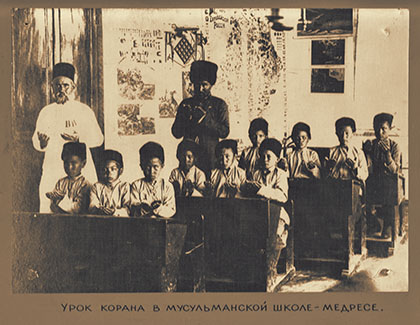 Do today Abaza obey all the rules and regulations of Islam? Obviously, they do not. Their social commitment and tradition, the influence of modern living conditions have a major impact on them. Respondent number 28 (born in 1985, male) from the village Apsua said: “I mostly Muslim, because I have more information about this religion, but I don’t have that deep faith, yet. I think, when I got older, I will start to perform namaz, because if you start to pray, you must comply with all laws of Islam. But our life and our traditions contradict Islam. For example, if you perform namaz, you can’t eat food from the supermarket, as well as meat bought in the market. But being under press of our modern life, it is impossible to comply with these requirements”(1).

Respondent number 23 from the village Apsua (born in 1964, male) also supported this view: “We can’t follow the laws of Islam, for example, on an equal basis with Arab Emirates. We have different laws than in Kuwait. We need to survive, but not to read the prayer all the time”(2).

People take hard attempts to bring strict adherence to the letter of Islam in a society where for centuries remained stable traditional norms and cultural values. Thus, the respondent number 54 (born in 1941, female) said: “Old people do not visit our old mosque and young people behave in an improper manner there. They do not believe in anything, what used to believe our old men, women, Effendi…” In the first place, a burial rite and everything that is connected with the funeral ritual cycle became a stumbling rock. In particular, respondents of middle aged and old respondents indicated that young radical Muslims denied the morning ritual of reading the prayers-dua, which Abaza used to read during the first three days after the funeral at the grave of the deceased.

Humans are very conservative, no one would voluntarily and easily agree to change or give up habits and affections formed over the years. The laws of social norms and traditions in this regard even more difficult to be changed by any outside interference. With regard to young people who are trying to insist on faultless following regulations of Islam and Islamic values ​​ over social order, interviewed respondents used the term “Wahhabism”. Thus, the respondent number 54 (born in 1941, female) said: “Wahhabism is gaining momentum among Abaza. Its manifestation is shown in the formal prayers and beards.”

The most serious, as noted above, resistance is always occurs when you try to invade in the funeral and burial rites: “The Wahhabis do not believe in anything, what our old men, women and Effendi used to believe. They deny everything you need to do for the dead. All the rituals, that we had before – the funeral ritual, remembrance, distribution of clothing, three-day readings on the grave after the funeral (dua for three mornings after the funeral) – Wahhabis say that this should not be done.”

The second in the line of priority of values ​​is a wedding ceremony: “Modern Wahhabis do not celebrate weddings; they deny wedding ceremonies and music, saying, “Listen to music makes devils laugh.” They do not recognize the registry office. “As a result, different segments of society begin to live apart from each other: “Old people do not visit our old mosque and young people behave in an improper manner there. They deny each old tradition.”  For the people of such a small population, such a confrontation, public controversy and division in society can be quite dangerous. But still, this study showed that only 3 % of respondents consider Islam as a potential threat to traditional norms and values. In general, respondents’ attitudes towards Islam very positive, for the most part, they note that following the requirements of Islam helped to prevent the spread of alcoholism and drug addiction among the Abaza. As the respondent number 22 from Apsua (born in 1969, female) said: “Everyone who started doing prayer, began to live more purposefully, created their own families.

Young people of older generation started drinking and many of them remained unmarried. They were badly affected by “Perestroika”, they have become pessimists who fear to create a family”(3). Other respondents also spoke on the fact that Islam stood in the way of alcoholism and drug addiction.

Respondent number 30 from Apsua (born in 1988, male) believes that going to mosque in the month of fasting and Muslim holidays bring people together: “Every Friday I go to the mosque. I follow Ramazan rules and most of the requirements of Islam, with the exception of five-time prayer. In Islam there are a lot of prohibitions, and I do not meet some of the requirements, but I try to change my way of life as it is required by my religion”(4). Respondent number 23 from Apsua (born in 1964, male) expressed a different view: “Three years ago, I learned to perform prayer. I learned a lot, but did not feel that it should be done. Adats (traditions) related to elders and parents are stronger. “But at the same time the same respondent said: “If it were not for Islam, now we would have more alcoholics” (5).

Comparative analysis of the historical development of Abaza shows us that over the past two centuries, Islam has played an ambiguous role in the life of the Abaza community. As a factor in people’s consolidation during the period of confrontation between the Russian and Ottoman empires, ultimately, Islam has caused mass migration of Abaza beyond their historical homeland, creating a problem of divided nation. At the same time, the system of Islamic values consolidated and developed the foreign community of Abaza. Abaza, remaining in their historic homeland, preserved Islamic traditions to a lesser extent. Today, older people complain that when they were young religion was banned, and they have very little information about the basics of Islam: “People grew unaccustomed to religion and we need more than one year to restore Islam among our people” (6). According to the majority of respondents of middle age and older, over the years of atheism during the Soviet period religion was lost, and now it could hardly compensate that great cultural and educational work, which was performed by the state. But respect for the basic rules of Islam is an integral part of traditional Abaza culture, and following basic rules and regulations, without any doubt, harmonizes the general condition of the community, avoiding many of the problems in both the private and public life.