- For the first time I see so many kids in a village, who want to learn dancing! – Magomet Hachukov was very glad to see children wishing to understand the art of dance, but also somewhat puzzled by this fact: he can’t accept them all, but his refusal upset kids greatly. – They left in tears. I am so upset – said the choreographer. 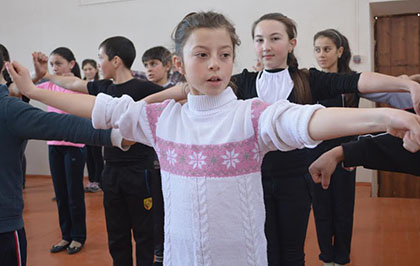 END_OF_DOCUMENT_TOKEN_TO_BE_REPLACED

In the period from 22 to 25 January 2015 in Istanbul with the support of the Ministry of Culture and Tourism of the Republic of Turkey was held the 19th annual travel and tourism trade fair “Emitt Istanbul”. During the exhibition, leading international tour operators presented their best deals for popular destinations of the Mediterranean, Europe, Asia and North Africa. January 22, the delegation of Abkhazia headed by the President of Chamber of Commerce and Industry Gennady Gaguliya and Chamber of Commerce and Industry staff arrived in Istanbul. The delegation from Abkhazia presented their own exposition: banners describing attractions with views of Abkhazia, and stands with old photographs. Abkhazia showcased print products and souvenirs, as well as a wide range of food and alcohol products: honey, adzhindzhuh, dried date, smoked meat, cheese, fruit, wine and cognac. Guests of Abkhazian stand were met with lively Abkhaz dances. 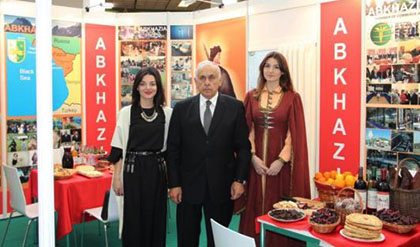 END_OF_DOCUMENT_TOKEN_TO_BE_REPLACED

Nuri Yeremeyevich Kvarchia is justifiably considered one of the main characters of the book “Famous People of the Caucasus” (Nalchik, 2013). “Abkhazia should be proud of the fact that there are people like Nuri Kvarchia, who cares about the culture of his people and who is serving fanatical and selflessly to the benefit of the culture for many, many years”, – in these words vice president of the World Artistic Committee A. A. Betuganov described Nuri Kvarchia. 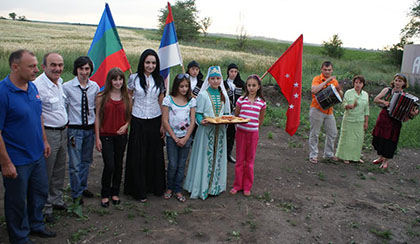 END_OF_DOCUMENT_TOKEN_TO_BE_REPLACED

Karachay-Cherkess State National Library named after Khalimat Bayramukova traditionally opens a new year with a month of local history and national literature. And traditionally the month was opened with a week of Abaza literature. These days in the library there is an exhibition of books written by Abaza authors including even some publications of 30s of the last century, printed in the Latin alphabet, and collections of recent years. 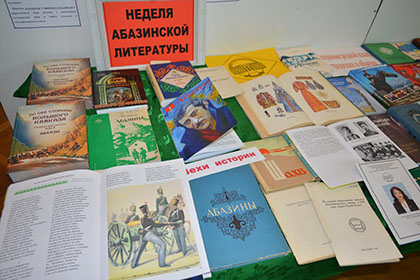 END_OF_DOCUMENT_TOKEN_TO_BE_REPLACED

Associate Professor of Circassian and Abaza Philology of Institute of Philology of KCSU Batalov Kasai’s Abaza Literature Textbook-Reader for 8th grade of educational institutions was published.

END_OF_DOCUMENT_TOKEN_TO_BE_REPLACED

On January 18, in Kazan in the hall of the State Grand Concert named after Salih Saidashev was held a concert of Abkhazian musical duo – Luka Gadelia and Christina Eshba. They performed a concert in the framework of the project “Cultural Seasons Russia – Abkhazia.”

END_OF_DOCUMENT_TOKEN_TO_BE_REPLACED

On Abaza writing based on Arabic script

Relatively recently, I thought about this in connection with audio recordings of my father Magomet Hasarokov (in the native village Kubina he was known as Mata). According to the documents, the year of his birth is 1890. In his own story, his mother told him about the year of construction of a bridge from iron structures across the river Kuban in the northern part of the village (the bridge was completely demolished by flood in 2002). Back in school I found an inscription on the bridge: 1902 – 1903 years. Records were made ​​in 1976, when, after the first grade, I used my money earned working in a student construction team to buy a two-track tape recorder, “Dinah”, primarily for recording of my father’s voice, who at that time was often sick. The total recording time is 40 minutes: verses (Surah) from the Quran and religious chants (dhikr). Father died in 1977, and many relatives and fellow villagers made ​​copies of these records. END_OF_DOCUMENT_TOKEN_TO_BE_REPLACED

Traditionally, on the night of 13 to 14 January Abkhazia celebrates Day of Creation of the World, which is coincides with the New Year according to the old calendar. This holiday in various parts of Abkhazia has different names: in Eastern Abkhazia – Azhyrnyhua, in Western Abkhazia – Hachhuama; although the ritual is similar. Feast of creation of the world has its origins in the ancient religion of Abkhazians. Abkhazians themselves associated it with the name of blacksmithing patron – Shashvy. The origins of respect for blacksmithing lie deep in antiquity. And to this day, smithy is considered to be a kind of a sacred place, where vows and oaths should be pronounced. 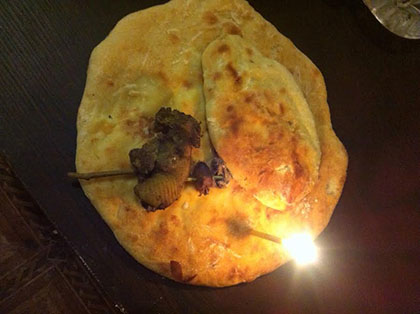 END_OF_DOCUMENT_TOKEN_TO_BE_REPLACED

Since ancient times, in different nations there were ceremonial dolls and talisman dolls. During Abkhazian ceremony “Dzioua” (“Dzioua” is the name of the deity), which was conducted for rainmaking, a doll played a role of sacrifice offered to the deity of water Dzioua.

Many scholars and travelers wrote about this rite. N.Janashvili in his work “Abkhazia and Abkhazians” in 1894 described this ceremony as follows: “During the severe summer drought all rural girls in their best clothes come together near the river. After getting into three groups, they prepare a float made from twigs, lay some straw, make a doll and dress it in woman clothes. When all these preparations are finished, they bring a donkey, cover it with a white sheet, put the doll on it and go to a place where the float is waiting; the rest of the girls go on both sides of the procession singing a special song. After reaching the river, they take the doll, put it on the float, light the straw and let the float down the river…”